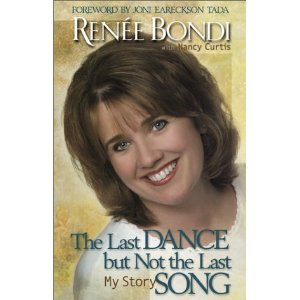 The Last Dance But Not the Last Song: My Story

Includes a Free CD with two songs. Read the inspiring true story of how a talented singer and teacher held onto faith and hope after a bizarre accident left her a quadriplegic. Renée Bondi is a popular speaker and recording artist who has shared the stage with notables such as Christopher Reeve, Kathy Trocolli, and Larry King. She has been featured in magazines such as Today's Christian Woman and Woman's World and on various radio and television shows, including "Hour of Power." Renée has released four inspirational CDs, is the president of Capo Recording, and the founder of Bondi Ministries. Among her many awards and honors is 2000 Woman of the Year from the California State Senate and recognition for Outstanding Service to the Community from the U.S. House of Representatives. She lives with her husband and son in Southern California.

Title: The Last Dance But Not the Last Song: My Story

The Last Dance But Not the Last Song: My Story