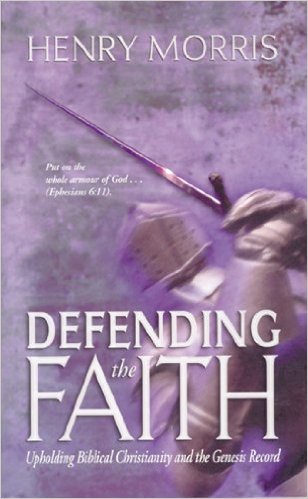 Defending the Faith: Upholding Biblical Christianity and the Genesis Record

Henry M. Morris, Ph.D., was the author of many books on scientific and biblical creationism, as well as a respected scientists writing a number of textbooks in his own field. He retired as president of the Institute for Creation Research, and was a prolific author and in-demand speaker: Dr. Morris passes away in 2006. When Jude wrote his Epistle, he implored believers in all ages to be diligent in their defense of the faith. And the faith clearly was, and is, belief in Jesus Christ as Creator and Redeemer. So just as Solomon assured us that there is nothing new under the sun, we?re not surprised that there are attacks on the gospel today; Jude was just as familiar with these enemies of the gospel in his time. Now, author Henry Morris offers up a brand-new look at these age-old attacks on the faith, tackling a breathtaking range of issues, from science and the Bible to liberal criticisms of the Bible. A powerful weapon in the battle for truth, Defending the Faith doesn?t shrink from the fight, but rather speaks the truth in love. Paperback 224 pages Henry Morris, Ph.D. , (deceased) earned the title, ?The Father of Modern Creationism,? through with his numerous writings about the creation/evolution debate. He was a respected scientist and wrote, textbook author and the founder of the Institute for Creation Research in California.

Defending the Faith: Upholding Biblical Christianity and the Genesis Record