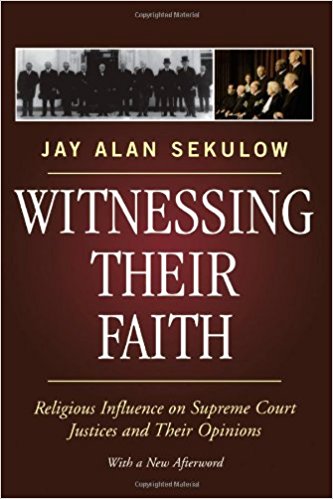 Witnessing Their Faith: Religious Influence on Supreme Court Justices and Their Opinions

When it was ratified in 1791, the First Amendment to the Constitution of the United States sought to protect against two distinct types of government actions that interfere with religious liberty: the establishment of a national religion and interference with individual rights to practice religion. Since that time, no question has so bedeviled the U.S. Supreme Court as finding the best way to interpret and apply the Establishment Clause and the Free Exercise Clause of the First Amendment. In this unique and timely book, Jay Sekulow examines not only the key cases and their historical context that have shaped the law concerning church-state relations, but also, for the first time, the impact of the religious faith and practices of Supreme Court Justices who have ruled in each case. Covering cases from the teaching of religion in public schools and the use of federal funds for parochial schools to today's debates about the Pledge of Allegiance and public displays of the Ten Commandments, Witnessing Their Faith is essential reading for anyone interested in the history and future of religious freedom in America.

Title: Witnessing Their Faith: Religious Influence on Supreme Court Justices and Their Opinions

Witnessing Their Faith: Religious Influence on Supreme Court Justices and Their Opinions