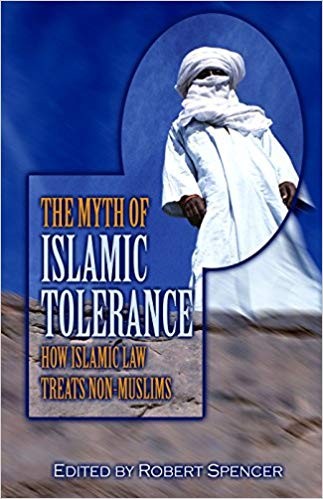 The Myth of Islamic Tolerance: How Islamic Law Treats Non-Muslims

Clean and sturdy. There is a note written on then title page. Never read. This collection of essays by some of the world’s leading authorities on Islamic social history focuses on the juridical and cultural oppression of non-Muslims in Islamic societies. The authors of these in-depth but accessible articles explode the widely diffused myth, promulgated by Muslim advocacy groups, of a largely tolerant, pluralistic Islam. In fact, the contributors lay bare the oppressive legal superstructure that has treated non-Muslims in Muslim societies as oppressed and humiliated tributaries, and they show the devastating effects of these discriminatory attitudes and practices in both past and contemporary global conflicts. Besides original articles, primary source documents here presented also elucidate how the legally mandated subjugation of non-Muslims under Islamic law stems from the Muslim concept of jihad — the spread of Islam through conquest. Historically, the Arab-Muslim conquerors overran vast territories containing diverse non-Muslim populations. Many of these conquered people surrendered to Muslim domination under a special treaty called dhimma in Arabic. As such these non-Muslim indigenous populations, mainly Christians and Jews, were then classified under Islamic law as dhimmis (meaning "protected"). Although protected status may sound benign, this classification in fact referred to "protection" from the resumption of the jihad against non-Muslims, pending their adherence to a system of legal and financial oppression, as well as social isolation. The authors maintain that underlying this religious caste system is a culturally ingrained contempt for outsiders that still characterizes much of the Islamic world today and is a primary impetus for jihad terrorism. Also discussed is the poll tax (Arabic jizya) levied on non-Muslims; the Islamic critique of the Universal Declaration of Human Rights; the use of jihad ideology by twentieth-century radical Muslim theorists; and other provocative topics usually ignored by Muslim apologists. This hard-hitting and absorbing critique of Islamic teachings and practices regarding non-Muslim minorities exposes a significant human rights scandal that rarely receives any mention either in academic circles or in the mainstream press.

The Myth of Islamic Tolerance: How Islamic Law Treats Non-Muslims