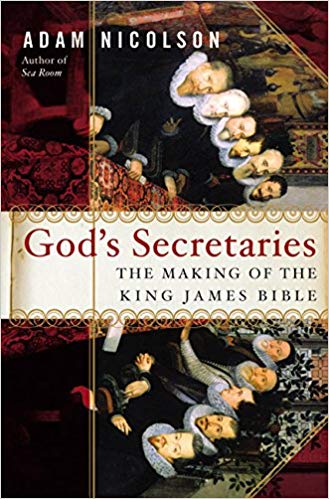 God's Secretaries: The Making Of The King James Bible

Sturdy and clean. No underlines. Former church library book. A net of complex currents flowed across Jacobean England. This was the England of Shakespeare, Jonson and Bacon; of the Gunpowder Plot; the worst outbreak of the plague England had ever seen; Arcadian landscapes; murderous, toxic slums; and, above all, of sometimes overwhelming religious passion. Jacobean England was both more godly and less godly than it had ever been, and the entire culture was drawn taut between the polarities. This was the world that created the King James Bible. It is the greatest work of English prose ever written, and it is no coincidence that the translation was made at the moment “Englishness” and the English language had come into its first passionate maturity. Boisterous, elegant, subtle, majestic, finely nuanced, sonorous and musical, the English of Jacobean England has a more encompassing idea of its own reach and scope than any before or since. It is a form of the language that drips with potency and sensitivity. The age, with all its conflicts, explains the book. The sponsor and guide of the whole Bible project was the King himself, the brilliant, ugly and profoundly peace-loving James the Sixth of Scotland and First of England. Trained almost from birth to manage the rivalries of political factions at home, James saw in England the chance for a sort of irenic Eden over which the new translation of the Bible was to preside. It was to be a Bible for everyone, and as God's lieutenant on earth, he would use it to unify his kingdom. The dream of Jacobean peace, guaranteed by an elision of royal power and divine glory, lies behind a Bible of extraordinary grace and everlasting literary power. About fifty scholars from Cambridge, Oxford and London did the work, drawing on many previous versions, and created a text which, for all its failings, has never been equaled. That is the central question of this book: How did this group of near-anonymous divines, muddled, drunk, self-serving, ambitious, ruthless, obsequious, pedantic and flawed as they were, manage to bring off this astonishing translation? How did such ordinary men make such extraordinary prose? In God's Secretaries, Adam Nicolson gives a fascinating and dramatic account of the accession and ambition of the first Stuart king; of the scholars who labored for seven years to create his Bible; of the influences that shaped their work and of the beliefs that colored their world, immersing us in an age whose greatest monument is not a painting or a building, but a book.

Title: God's Secretaries: The Making Of The King James Bible

God's Secretaries: The Making Of The King James Bible