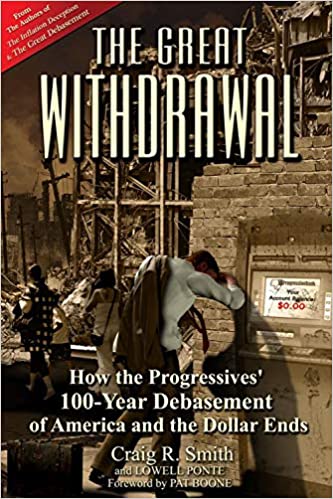 The Great Withdrawal: How The Progressives' 100 Year Debasement Of America And The Dollar Ends

Clean and sturdy. Very light wear. No underlines. Detroit was to be a workers' paradise, a symbol of progressive success. Instead, it has become a symbol of big government failure, corruption, violence, and decay. In 2013, after a great withdrawal of more than a million productive residents, once-great Detroit became the largest American city ever to declare bankruptcy. The Great Withdrawal explores why Detroit failed, why other liberal cities may soon follow, and how this could drag America into insolvency and prolonged depression. It explores the bizarre Nanny Statist Progressive movement that took power in America in 1913 and has driven America on a 100-Year detour away from the ideals of our nation’s founders and toward the stagnation of Euro-socialist welfare states. Smith and Ponte, in this their fourth book, look at how Progressivism has used addiction to welfare and easy money, as well as psychological manipulation politics from “crisis-ocracy” and “the herd inside our heads” to the sinister brain science techniques known as “nudge” to win elections, manufacture consent, impose invisible taxes, and control us.

Title: The Great Withdrawal: How The Progressives' 100 Year Debasement Of America And The Dollar Ends

The Great Withdrawal: How The Progressives' 100 Year Debasement Of America And The Dollar Ends