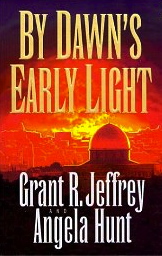 Daniel Prentice’s technological skill helped save the world from the deadly impact of Y2K in the popular thriller Flee the Darkness. But that victory didn’t stop the encroaching evil. In this gripping sequel, tension mounts in the 21st century as a Russion-Arab invasion of Jerusalem seems imminent. Now Daniel must guide NSA chief Captain Michael Reed in the battle ahead. More than a battle for the land, the offensive could be the fulfillment of Ezekiel’s ancient biblical prophecy of Gog and Magog invading Israel. As the world shudders in response, the invaders offer Israel a choice: surrender or be obliterated. As the State of Israel fortifies itself against the coming onslaught of missiles, biological weapons, and an invasion force attacking from all four borders, Reed and his Israeli counterpart, Sergeant Major Devorah Cohen, exhaust every military resource to prevent a nuclear war. Soon Reed and Cohen realize that the real battle they face is one of spiritual origin—for which no military drill could prepare them. Will Michael and Deborah find faith to confront the enemy? Never have the forces of evil been stronger, the stakes higher, or the world’s possible destruction nearer than By Dawn’s Early Light.