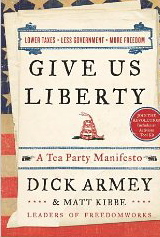 Give Us Liberty: A Tea Party Manifesto

Dick Armey's FreedomWorks organisation has become front and centre in the Tea Party movement "New York Times" - one of the fastest-growing and most talked-about political phenomena in recent memory. With its strong Anti-Washington bent, Tea Party followers are outraged by the false conservatism of the Bush administration, which did nothing to shrink government spending or the deficit, and are further alarmed by President Obama's massive bank bailouts, wasteful stimulus spending, and health-care legislation, according to Armey. In "Give Us Liberty", the former House Majority Leader defines what... View more info